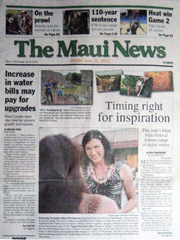 That's the premise of "2012: The Beginning," the documentary that opened the 2012 Maui Film Festival on Wednesday.

The festival, featuring some 45 movies of all shapes, sizes, genres and styles, will continue this afternoon through Sunday night at Wailea's outdoor Celestial Cinema and in Castle Theater at the Maui Arts & Cultural Center.   FOLLOW:

Dire prophecies that the world will end on this year's winter solstice, attributed to the Mayan calendar, have been making their way from so-called New Age sources into the mainstream media as the date approaches.

But the gloom and doom are products of today's sensation-seeking media rather than the calendar itself, according to the film's director.

"That's our interpretation," said filmmaker Shannon Kring Buset. Her film shows that that date actually signifies the end of an era - "buk'tan" in the Mayan language - not unlike a millennium on Western calendars.

"Every time there was a change of buk'tan, there was a major change in their society," said Buset, a former chef with cooking schools and a national cuisine series on PBS before she moved to the Guatemala-Honduras border and started a new life for herself. This documentary is her first film.

Buset will be one of the participants in a filmmaker's panel titled "Soul in Cinema" at 12:15 p.m. Saturday at the Wailea Beach Marriott Resort & Spa.

When the Maya began a new buk'tan, "the people were participants in that change," Buset said. "They questioned where they were going. They asked, 'Where are we? Where do we want to go as a people collectively?' "

Any parallels between changing eras on the Mayan calendar and our own are purely intentional. Many of the festival's films, including tonight's epic, wordless, world-traveling documentary "Samsara," screening at 8 at the Celestial Cinema, have similar themes.

"I didn't want to be aligned with 'New Agers,' " laughed filmmaker Buset, who described herself as "a girl from Wisconsin who had never made a film before."

But, she said, "It's not about me. It felt as though I was guided. When these amazing opportunities came, I felt it was just time to tell these stories."

While the Wailea screenings, parties and events put the emphasis on star power from Hollywood and elsewhere, the Castle Theater screenings showcase a wider diversity of filmmaking voices.

A program of shorts Thursday afternoon revealed a spectrum from around the world and in styles from animation to informational, emphasizing themes from environmental awareness to romantic love to pure whimsy.

Two selections from Hawaii - "Until the Sun Sets" and "Changing Tides" - took their places in the global world of cinema, and the range of emotions in the program.

While a variety of languages could be heard or read in the subtitles, one of the most effective was silence - or at least, wordlessness, accompanied by music.

Renee Kayon, who had served as a member of the lighting crew on this year's Oscar-winning best picture, "The Artist," turned the equation around when she shot her own romantic comedy, "Le Petit Nuage" ("The Little Cloud") in black and white, without dialogue, like an old silent movie.

"Working on 'The Artist' was a fantastic experience," she said. "A French film crew came to tell a Hollywood romance. I thought how great it would be to go to Paris to tell a French romance."

Once she got the idea, all the pieces just fell into place - crew and actors all saying yes, right up to the film's cellist, whom she met on her return flight from Paris.

She described the making of the film as "incredible and magic," all the way to its world premiere at the Maui Film Festival.

"It was our first shot out of the gate. We felt lucky to be selected."

Being able to communicate without words, in black and white, "draws you in. It makes the audience work a little harder." The reaction it produces "feels like what we've been missing somehow. And it shows the global language of gesture," she said.

It has inspired her to expand the project to 7 SHORT FILMS ABOUT LOVE, each in a different country, each in black and white.

* This article includes a correction from the original published on Friday, June 15, 2012. The wrong time for the filmmaker's panel appeared in this story. The Maui News apologizes for the error.

© Copyright 2012 For The Maui News. All rights reserved. This material may not be published, broadcast, rewritten or redistributed.